Inspired by Xenia’s wedding post over at Collar City Brownstone (check out Xenia’s home, it’s beautiful) I decided to make a blog post about some of the celebrity crushes I’ve had throughout my life.  I’m sure I’ve left lots out, which is probably a good thing.  In a sort of rough chronological order, I present the following.  I’ve decided not to include any text because when I started typing, I realised I was making up really pathetic excuses.

EDIT:  I forgot to mention that I wasn’t going to put names in, so you guys could guess!  But I’ll put the names in at the bottom, from top to bottom  🙂

2) Michael Jackson in the Thriller era.  I had a Billie Jean windcheater (sweater)

5) A constipated Kenny Rogers.  I thought he was soooo handsome.

6) Michael Landon as Pa.  Then that Highway To Heaven show.  I must have inherited this from my mum, she loved him too from Bonanza days.

8) Barry Gibb.  You may be noticing a theme of big hair and beards here but mercifully, no photo of Santa Claus.

11) Alex Papps in The Henderson Kids (a good Aussie drama for young adults).  Carry on, togeeeeether, every step of the waaaay…

12) Patrick Swayze.  I was on the Swayze bandwagon before Dirty Dancing, thank you!

15) George Michael.  Poor Andrew Ridgley never got a look in.

18) Nik Kershaw.  Did you know The Riddle was just random ramblings according to Nik, because he needed to get the melody right?  But then it took off and people around the world are still trying to come up with meanings and Nik is all “there is no meaning!”

19) Johnny Depp from 21 Jumpstreet..  I’m not a fan of his these days.  The modern Charlie and the Chocolate Factory was one of the worst movies and casting I’ve ever seen.  I couldn’t get over how bad that movie was.

20) Tim Finn from Split Enz, who didn’t always look like that.  He’s so handsome, see?

21) The singer from Men Without Hats.  I never knew his name.  Oh hang on, Wikipedia says Ivan Doroschuk.

23) Joey from Degrassi.  If I went to Degrassi High I would probably have been picked on for that.

24) Harrison Ford as Indiana Jones (yes he looked better dressed like this).

26) Axl Rose.  I think it was the whole bad boy thing, which is quite lame now.

27) Freddie Mercury.  Did you know his real name was Farrokh Bulsara?

28) Patrick Stewart.  Brilliant actor and what a voice!

29) LL Cool J.  He’s just gorgeous.  I saw him on Sesame Street rapping “it’s addition, you don’t need to be a mathematician, add em add em add em addem up” once and let me tell you there is no better way to start your morning!  This lady loves Cool J!

31) Lupe Fiasco.  I was very taken with his song/video “Bitch Bad” (don’t let the title fool you!)

I completely forgot one of my big crushes and you guys have to guess this one: 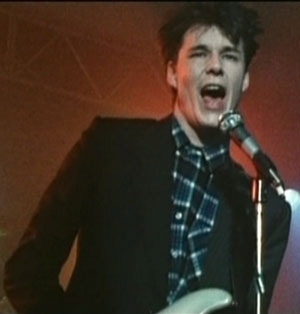 Hello and welcome! I'm Faye and I blog about vegan life here in Melbourne, Australia. I love connecting readers with news of events, dining options, products, services and anything else that can help people already living, or those considering switching to a more plant based lifestyle. Family, my Greek roots, secondhand shopping and my home town are also a focus on my blog.